Dr. Soho Machida is currently Professor of Graduate School of Integrated Arts & Sciences, and Director of Center for Ecological Peace Studies at Hiroshima University, Japan. Dr. Soho was born as a son of Haiku poet in 1950, and practiced as a Zen monk for 20 years in Daitokuji, a cloistered monastery of Kyoto, but left for the US in 1984. He has MA (theology) from Harvard University and Ph.D. (oriental studies) from the University of Pennsylvania. Taught at Princeton University (90-98), National University of Singapore (98-00), Tokyo University of Foreign Studies (00-05). He is also a visiting professor of Akita International University, one of the most prestigious schools in Japan. He used to have his own one-hour program in NHK TV on the topic of Japanese Buddhism during 2010-11. He conducts voice-meditation called Ariagto Zen & weekend fasting seminars in different cities of Japan each month as well as in France, Taiwan & the US.

In the core of Japanese religion, which is represented by Shinto & Buddhist traditions, there is a philosophy of "musubi" (integration).  Shimenawa (intertwined rope of sacredness) in Shinto shrines symbolizes the integration of sacred & profane, this world & the other, man & woman, mind & matter, etc.

The creation myth of Japan begins with the story that male & female divinities made love in order to create Japanese archipelago. Sexuality as the symbolic act of "musubi" between two genders is cerebrated in Japanese religious tradition. That is why most of ancient rituals were closely linked with the sexuality in Japan. It is quite different from Judeo-Christian tradition in which the sinful conduct of Adam & Eve is condemned.

Modern civilization has been developed on the structure of dichotomy between science & religion, nature & man, haves & haves-not, etc. Japanese have been also heavily influenced by this dichotomous thinking after modernization in the 19th century, but they still maintain a non-dichotomous way of thinking in their most basic nature. Diverse features of ambiguity in Japanese culture originate from that kind of thinking manner.

Mankind has been exposed to many critical issues such as a global scale of air & water pollution, huge economic imbalance, bloody civil wars, etc. Unless we substantially change the course of life, we may be doomed into the collapse of civilization as the contemporary tower of Babel in the near future.

Modern civilization is getting closer to a turning point where the ethos of human life may shift from dichotomy to reintegration, because we can no longer keep exploiting natural resources and the disadvantaged people. Even the believers and non-believers must cooperate together for the construction of better society. In that respect, Japanese philosophy of "musubi" has big possibilities to contribute to the paradigm shift of modern civilization. 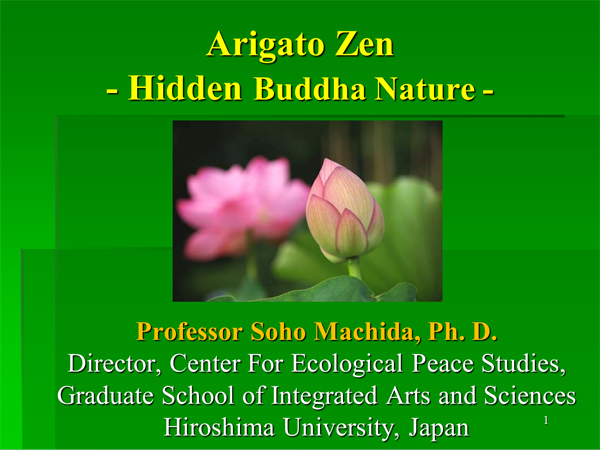 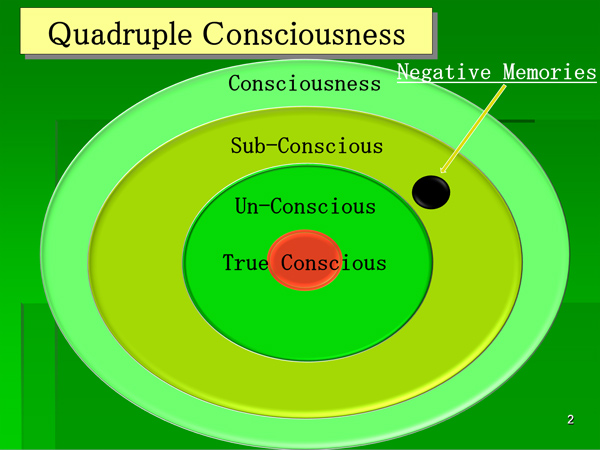 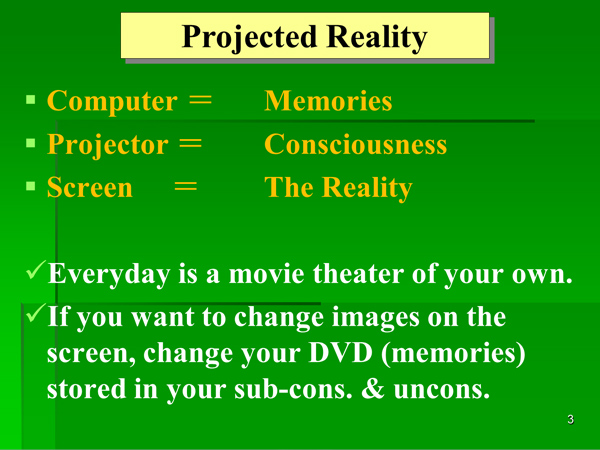 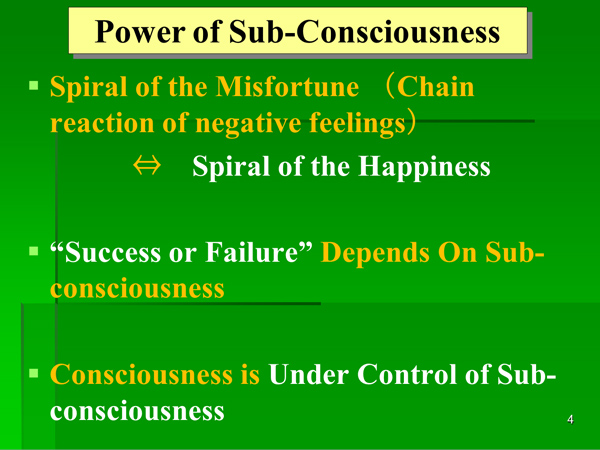 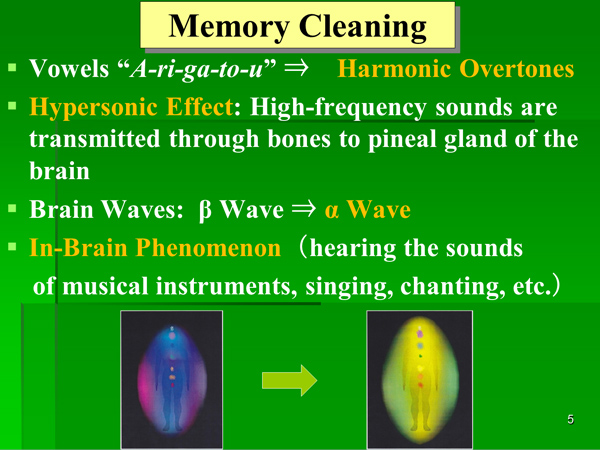 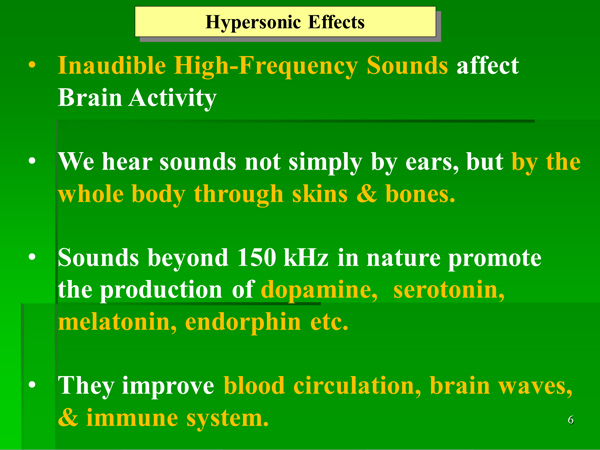 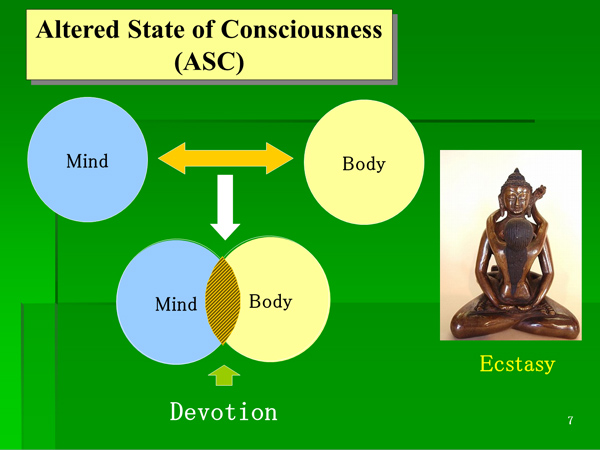 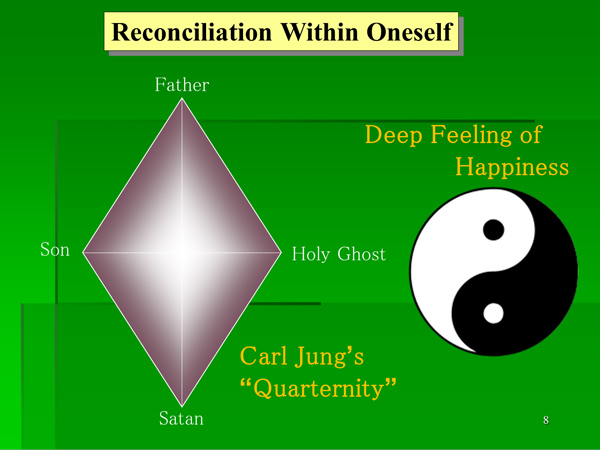 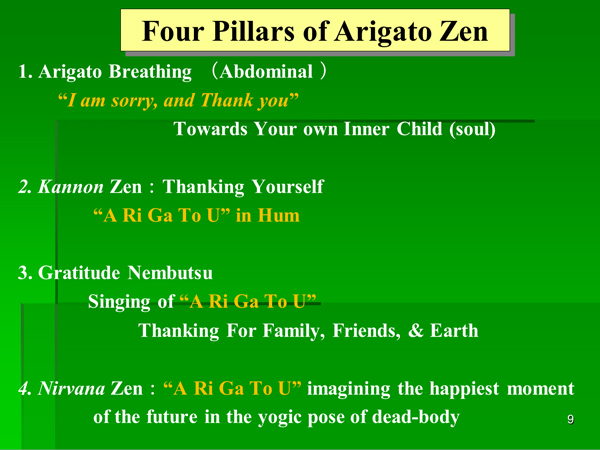 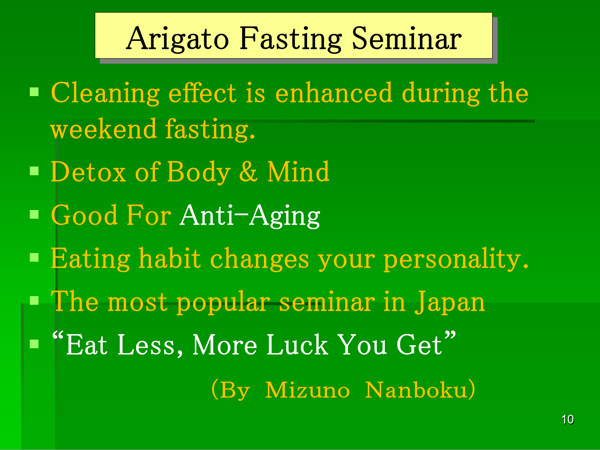 "Arigato Zen" (arigato: thank you in Japanese) is an easy & simple voice-meditation which Dr. Soho developed based on his 20-yrs. Zen training and scholarship as a specialist of comparative religion.  By performing the "Arigato Zen", one is able to remove themselves of negative memories within one’s own sub-consciousness, which lie at the root of all problematic phenomena.  By achieving clarity of the sub-consciousness, one is able to live with a sense of vast fulfillment and joyfulness.

With his motto, "through physical practices, you can experience real mental change", Dr. Soho invented this revolutionary method of meditation that transcends religion and ethnicity.  It consists of four pillars:

During the first 10 minutes, in sync with the diaphragm breathing, we internally recite the words "I am sorry. Thank you” toward our own inner child (soul).  People today have the tendency to breathe in short, shallow breaths- this is one of the causes of our daily stress.  Simply by breathing in long, deep breaths, you will feel calmer and more relaxed.

In the next 15 minutes of Kannon-Zen, while putting your palms together on your heart, feeling the vibrations of our own voice,, you recite in hum 'a-ri-ga-to-u’, thanking yourself who have overcome so many challenges of life.  It is important that you let yourself become fully absorbed in the sounds of 'a-ri-ga-to-u’.  As a result of this steady humming technique, you may allow yourself to completely enter the mental state of non-self.

During the next 20 minutes is "Kansha (gratitude) Nembutsu", put your hands together and focus your thoughts on a specific matter such as your family, friends or work.  This serves the purpose of introspective healing, and helps to relieve stiffness of the mind.  While practicing Kansha Nembutsu, turn your head slightly upwards, and allow yourself to chant merrily and sonorously.  Tears may come down as a sign of subconscious cleaning.

In the last 15 minutes of "Nehan (nirvana) Zen", you lie down on the floor face up, you keep chanting 'a-ri-ga-to-u’ imagining of the concrete scene in which your dreams & wishes are 100% materialized.

The sound waves that are created by saying the vowel words together as a group has a healing affect on the body & mind- as a result it is not unusual for tears to flow during the chanting.  At times you may hear voices or the sound of musical instruments- this too is a phenomena occurring within the brain that results from exposure to high frequency sound waves.

Generally, eyes are kept half-closed, but it is OK to close them entirely. At times you may be overcome with sleepiness, but this is a sign that your body & mind are entering a relaxed state- allow yourself to sleep for awhile, and when you awake, re-focus your concentration again.

After this one-hour voice-meditation, you should feel a great change both mentally and physically. This is a remarkable way of "psycho integration" between the conscious & the unconscious. It is not painful at all like the conventional psychoanalysis through which some of clients may experience great pains.

One of the common characteristics of modern people, is that they hold a needless sense of doubt and worry within themselves. That sense of worry attracts other negative phenomena- creating a vicious cycle of negativity. By removing this sense of doubt, and strengthening our sense of happiness, we end up having more pleasant experiences.  Arigato Zen is essentially a meditation technique for attracting good fortune into our lives.

First of all, fasting is not a painful or distressing activity. In addition to improving health, beauty, and youthfulness, fasting serves as a process of mental and physical cleansing. The three-day and two-night fasting event aims to reinvigorate the body & mind.

During the seminar, we will only consume a small amount of vegetable and fruit-based enzymes. On the morning of the third day, we will eat lots of raw vegetables. Fecal stasis occurs in almost everyone to some degree in our daily lives, but you will likely experience a cleansing of the bowels within an hour after this breakfast.

This cleansing process will undoubtedly leave you feeling enormously refreshed. All that is left to do is to replenish yourself with a calm and relaxing hot-spring bath. You will undoubtedly be filled with a fresh breath of life—you will even notice your skin feeling youthful and smooth, and you will emit a fresh aura like never before.

Toxins build up in our bodies over the years. By removing them through fasting, we can recover the natural levels of immunity and healing abilities of our bodies. As another great feature of fasting, when we return to our usual lives, it makes the act of eating that much more satisfying. Furthermore, the body begins to adjust itself so that it only takes in what it needs and stops over-consuming. For time & venue, please check Soho’s Japanese web-site.